Describe a Houseboat Trip to Me

Hal waved and told us to have a great trip as we pulled away from what was now our home port and headed back to the river. After reaching the main channel I turned upriver 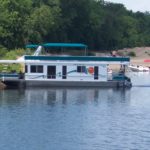 which would take us past downtown La Crosse, under the blue interstate bridge, and north to adventure!

There it was. U. S. Lock & Dam #7. Dresbach, Minnesota, my first dam. Passage would take us into the next pool. The river between dams are called, “pools.” Traffic was light, and we entered the lock with several other small boats. I called for “all hands on deck.” We held on to ropes as lock workers scurried about. The gates closed behind us and the water rose. In no time it seemed the gates in front of us opened. We let the ropes drop, waved at the lock workers, and sailed again into the main channel of the Mississippi.

We stayed in that pool for the rest of the afternoon checking out the boats, the people, waving at everyone, and enjoying the role of rubbernecking tourists. We set up a buffet on the front deck and everyone ate as they got hungry. Bill was always hungry. Nothing new there. Everyone took a turn driving MY BOAT with Charlie or me close at hand. What a marvelous day.